Borussia Dortmund top striker Erling Haaland scored twice on his return from injury with a second-half penalty to help his team beat Mainz 3-1 on Saturday to go top of the Bundesliga table.

The Norwegian forward, who had been out since late September with a muscle injury, looked to be back at his very best and continued his sensational scoring run in the Bundesliga, having now netted 49 times in 49 league matches.

The 21-year-old opened his account on Saturday with a spot-kick in the 54th minute following a lengthy VAR review over a handball and then struck again deep in second-half stoppage time.

Dortmund go top on 18 points, two ahead of champions Bayern Munich and Bayer Leverkusen, who face each other on Sunday. Freiburg are also on 16 points following their 1-1 against RB Leipzig.

“It is clear he had been missing in our team,” Dortmund captain Marco Reus, who scored their opener, said of Haaland. “It is important that he plays because he constantly keeps two or three players occupied.”

“To score two goals on his comeback is top. That is why we signed him.”

The hosts, who travel to Ajax Amsterdam for the Champions League next week, had shot out of the blocks and earned a dream start with Reus thumping in a deflected cutback in the third minute for a dream start. 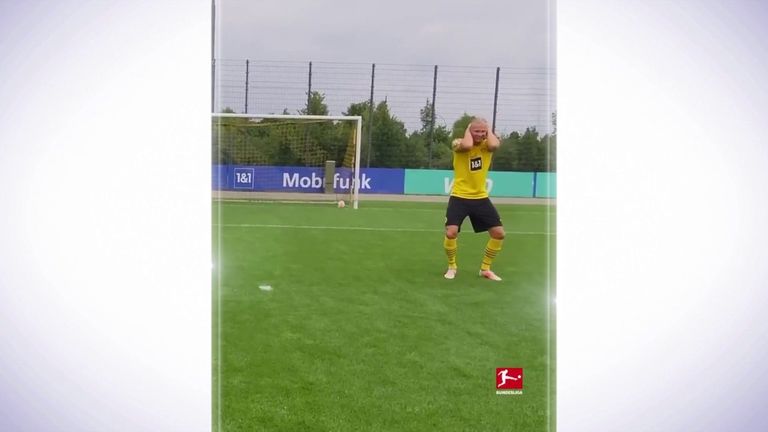 It was Reus’ 14th goal in 20 games against Mainz, the most he has scored against any Bundesliga club.

In a tense first half, Dortmund had three-quarters of possession but had to wait almost the entire half for another chance in stoppage time, when a Jude Bellingham effort was cleared off the line.

Haaland’s penalty gave Dortmund a measure of comfort in the second half and Mats Hummels hit the post with a glancing header but the visitors were not yet done.

Mainz struck with Jonathan Burkardt in the 87th from a mistake by Dortmund keeper Gregor Kobel to set up a nervous finale, before Haaland settled it in extra time to make it 70 goals in 68 matches in all competitions for his club, securing them their ninth consecutive home league win.

Felipe Anderson and Sergej Milinkovic-Savic scored late to complete a 3-1 comeback win for Lazio against Serie A champions Inter Milan in Rome on Saturday, as Simone Inzaghi fell to his first league defeat as Inter coach against his former club.

Ivan Perisic’s penalty put Inter in front at the break, but Ciro Immobile levelled in the second half with a spot-kick of his own.

Anderson then fired Lazio ahead after 81 minutes, leaving Inter players furious that the hosts continued playing while the Nerazzurri had a man down, but Milinkovic-Savic made sure of victory with a close-range header in stoppage time.

Inter’s first defeat of the season leaves them third in the standings on 17 points, with Lazio moving up to fifth place, three points behind them.

AC Milan produced a superb second half fightback from two goals down to beat Hellas Verona 3-2 at San Siro on Saturday evening and go top of the Serie A table.

A Gianluca Caprari strike and Antonin Barak penalty gave the visitors a comfortable halftime lead, but Olivier Giroud halved the deficit with a 59th-minute header.

The Rossoneri then turned the game on its head in the space of two minutes, as Franck Kessie equalised from the penalty spot and Koray Gunter steered an attempted clearance into his own net.

There was further good news for the hosts when Zlatan Ibrahimovic, their top scorer last season, made his return from injury from the bench for the final 13 minutes after more than a month out.

Milan go top of the table on 22 points, one point ahead of Napoli ahead of their game against Torino on Sunday, while Verona are 13th with eight points.

French champions Lille suffered their fourth defeat of the season when they were beaten 1-0 at promoted Clermont on Saturday ahead of a key Champions League clash against Sevilla.

Vital N’Simba scored his first goal in the league to give Clermont their third win of the season and lift them up to 11th on 13 points.

Lille, who take on Sevilla on Wednesday looking to bounce back from a poor start in the Champions League Group G, are eighth on 14 points, 13 behind leaders Paris Saint-Germain.

Lille were without the suspended Burak Yilmaz and the Turkey international’s absence weighed on the northerners, who lacked aggressiveness throughout.

Clermont were the first in action and they were rewarded for their domination in the 32nd minute when N’Simba found the back of the net with a low half volley after Benjamin Andre’s clearance fell in his path.

Lille had a penalty claim denied early in the second half after N’Simba appeared to handle the ball in the Clermont area.