​Inter need to win. Simple as.

Barcelona take on Borussia Dortmund in the other Group F clash, but no matter what the result is in that encounter, Inter simply must overcome Slavia Prague on Wednesday night if they are to stand a chance of qualifying for the Champions League knockout stages.

Tasked with beating the plucky Czech outfit, history isn’t exactly suggesting they’ll manage to do so, as Slavia themselves aim to secure their first victory of the so-called ‘group of death’.

Whatever transpires, be sure that Opta have got all the stats you need ahead of this vital European showdown, in what looks set to be another enthralling round of ​Champions League action.

Rotten Run on the Road It has been a difficult spell on their Champions League travels for ​Inter, who are struggling to transfer their fine league form into European away days.

They are currently on a run of four consecutive away Champions League defeats, with only Roma (2017-2018) going on a worse run (five). Trouble ahead, or victory in sight? That run included a 1-1 draw with Wednesday’s opponents at San Siro, making the trip to the Czech capital significantly more important than it should be.

Inability to Hold Onto a Lead 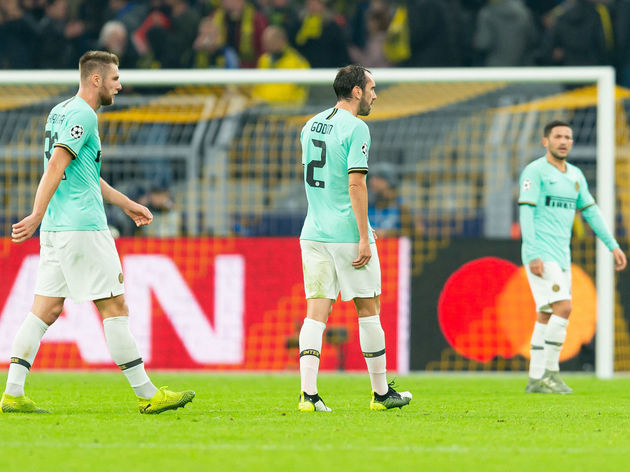 Granted, the opposition on both their last two away trips in the Champions League were Barcelona and Dortmund, but still, game management is crucial in Europe.

Having taken the lead in both of the aforementioned matches, Inter proceeded to lose each time. As Slavia showed in their home game against La Blaugrana, they can hold their own at home, so this game won’t be over until the fat lady sings…Opera, I presume.

Could That All Change? Based on history, yes.

That’s because Slavia haven’t had it all their way over recent times, despite some admirable outings in the competition.

In major European competition, Slavia are winless in four matches against Italian opponents (losing twice) since a 2-1 win over Palermo in February 2006 in the UEFA Cup.

As mentioned previously, however, one of those draws did come in the reverse fixture with Inter this season. Always look on the bright side, eh?

This man is on fire at the moment, which is pretty good going considering it’s winter. Slavia have given 3,119 minutes to Czech players in the Champions League this season – the most by players of the nation of the club they’re representing in the competition this campaign. At least in the first half of matches, that is.

In fact, it is a fairly worrying sign for Wednesday’s hosts, that they are yet to net in the first 45 minutes in any of their last eight clashes in the competition – this is despite having 36 shots during that time.