We’re approaching the final round of Champions League group stage games, with a number of teams still looking to secure their spot in the last 16.

There have also been a number of enthralling games with this year’s competition still in its infancy, as the

With just one more round of group stage action to go, things are hotting up in Europe’s elite club competition, with several sides set for dramatic and potentially blockbuster-producing showdowns.

Here we look at eight of the greatest group stage games in Champions League history. With just 24 minutes left to play, Werder Bremen found themselves 3-0 down against Belgian champions Anderlecht. They couldn’t, could they?

With manager Otto Rehhagel and talisman Wynton Rufer at the helm, anything is possible. The German side scored their first through Rufer with an expertly taken chip over the onrushing goalkeeper.

Rune Bratseth scored the second, giving Die Werderaner real hope, before Bernd Hobsch and Marco Bode put the hosts ahead. Rufer finished off proceedings with his second of the night, which would be named The Miracle of Weser after the river that runs through Bremen. At the age of just 8, a young Andriy Shevchenko was forced to depart Kiev following the Chernobyl nuclear disaster, not knowing what his future would have in store for him. Well, 11 years later he was scoring a hat-trick in a 4-0 victory against Barcelona at Camp Nou.

Despite fielding global superstars like Luis Figo and Rivaldo, Barcelona would finish bottom of a Champions League group that also contained PSV Newcastle 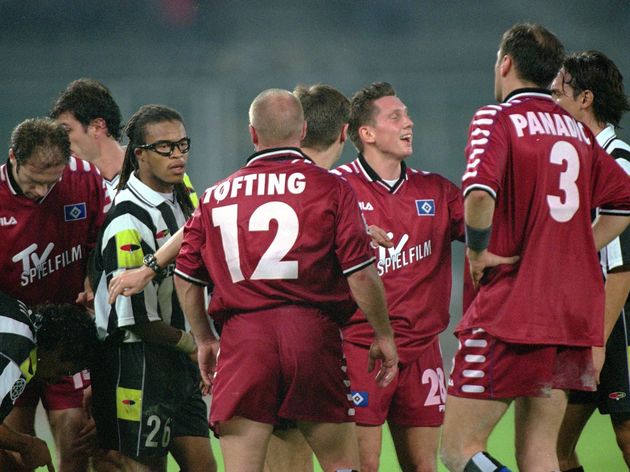 Here we have one of the big Champions League upsets of the early 2000s as Frank Pagelsdorf’s Hamburg stunned Carlo Ancelotti’s Juventus side that featured names like Edwin van der Sar, Zinedine Zidane, Alessandro Del Piero and Filippo Inzaghi.

The away side had opened the scoring through Igor Tudor’s sixth minute header before former Leeds star Tony Yeboah equalised after 17 minutes. Juventus would continue to dominate proceedings, with Inzaghi helping himself to two goals to put La Vecchia Signora in a strong position.

Die Rothosen refused to lay down, with Mehdi Mahdavikia scoring before Hamburg goalkeeper Hans-Jort Butt levelled the scores from the penalty spot with less than 20 minutes remaining.

The game was not done there, and Niko Kovac put the hosts in front with eight minutes to go. The hearts of Der Dino were broken six minutes later, as Inzaghi was pulled down in the area and duly converted from the spot to make it 4-4. Arsenal needed a Thierry Henry-inspired performance to turn their torrid 2003/04 Champions League season around with defeats to Inter, Dynamo Kiev and a draw with Lokomotiv Moscow leaving them bottom of their group.

Arsenal did, however, have a 26-year-old Henry who was at the peak of his powers. The Frenchman opened the scoring with a sublime side-footed effort from the edge of the box. Henry added a second and goals from Freddie Ljungberg, Robert Pires and Edu Gaspar helped claim a historic victory at San Siro.

The performance from Henry was so good that Inter teammates Marco Materazzi and Javier Zanetti were left fighting over his shirt at the end of the game. In an end-to-end game, Croatian striker Dado Prso scored four goals in what was, until recently, the highest scoring game in Champions League history (now behind ​Borussia Dortmund 8-4 Legia Warsaw).

Despite their poor showing, Deportivo had finished the 2001/02 La Liga season in second place above Spanish giants Real Madrid and Barcelona, illustrating they were not the competition’s whipping boys. Monaco, however, were far the superior side and progressed all the way through to the final, where they were eventually beaten by Jose Mourinho’s Porto. Rivaldo put the visitors ahead, dampening Scouse spirits, before Florent Sinama Pongolle and Neil Mellor put the hosts 2-1 up. With one more goal needed in order to progress, the Reds’ reliable man Steven Gerrard came good once more, smashing the home side into a 3-1 lead with barely minutes to spare.

The rest, they say, is history. Lyon needed nothing short of a miracle prior to their 2011/12 group stage game away to Dinamo Zagreb. Heading into the final fixture, Lyon needed second-placed Ajax to lose to Real Madrid and manage a seven-goal swing in order to progress to the knockout stages.

Lyon got off to a terrible start, conceding a Mateo Kovacic goal just before half time, but the game was far from over. The second half saw Lyon score SEVEN goals, with Bafetimbi Gomis – later of Swansea fame – helping himself to four.

With Ajax eventually losing 3-0 at the hands of Real Madrid, Lyon had achieved their seven-goal swing (and more), progressing through to the knockout stages of the Champions League. Eight goals scored, two more disallowed, two red cards, VAR-filled controversy – this was a night to remember which had all the ingredients of a Champions League classic.

Ajax had given themselves a resounding lead via goals from Quincy Promes and Donny van de Beek, along with own goals from Tammy Abraham and Kepa Arrizabalaga. However, you could sense that Chelsea were never really down and out, and hope was restored as Daley Blind and Jöel Veltman were both sent off for the Dutch side.

Chelsea fought back emphatically, and goals from César Azpilicueta and Reece James put the Blues back in the game. The drama was not over there as Azpilicueta drilled in a fine effort from within Ajax’s box to put the hosts in front, Chelsea had done it…or had they?

The interference of VAR added late drama to the game, as Abraham was adjudged to have handled the ball in the build up. Goal disallowed, the game finished 4-4 and created yet another Champions League classic.