​If you know anything about José Mourinho, you’ll know that he is one of the most charismatic characters around.

Regardless of which club he has been leading, you can always count on Mourinho to ruffle a few feathers with his goal celebrations. Love him or hate him, you can’t deny that he is fascinating to watch.

Here are seven of his best celebrations ever.

Before the 2003/04 season,  English football knew very little about Mourinho. However, by the end – specifically the end of the last 16 against ​Manchester United – the ​Premier League knew everything they needed to about the boss.

Mourinho’s Porto side netted a late equaliser in the second leg at Old Trafford to book their place in the next round, and the boss responded by galloping down the touchline at the Theatre of Dreams to celebrate.

With one run, Mourinho had made himself the hottest managerial prospect on the entire planet, and his reputation grew even larger after Porto lifted the ​Champions League trophy at the end of the season. 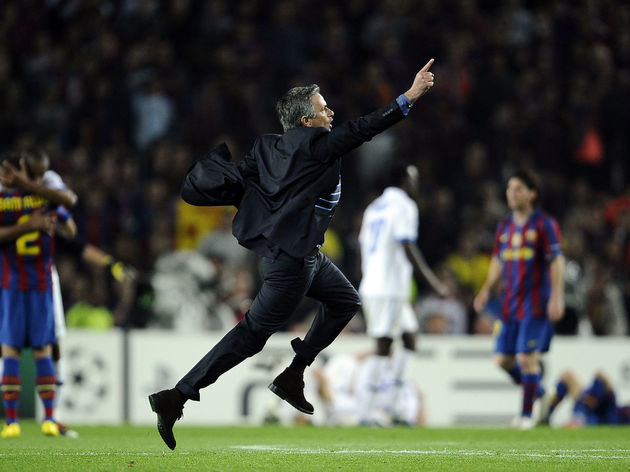 Standing between Mourinho’s Inter side and a place in the 2009/10 Champions League final were ​Barcelona, but ​Inter managed to get one foot in the final when they picked up a 3-1 win in the first leg at San Siro.

The Serie A side travelled to Camp Nou for the return fixture knowing that the tie was by no means over. A late Gerard Piqué goal threatened to spoil the party, but a 1-0 win for Barcelona was not enough, and it was Mourinho who was celebrating.

The boss sprinted on to the pitch, wagging his finger at the Camp Nou crowd. Fans got so heated that

Hit By a Bottle vs. Villarreal 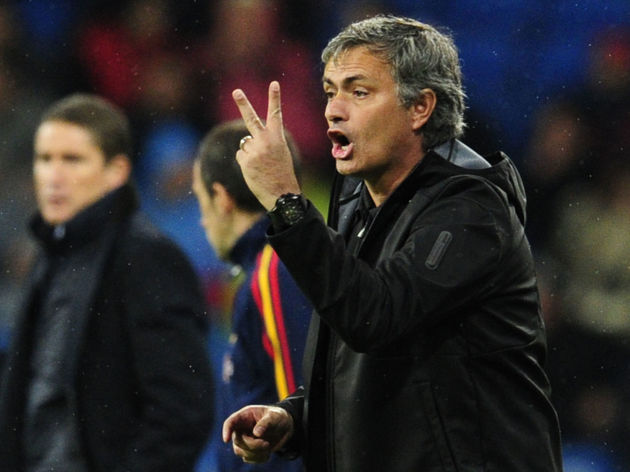 Mourinho left Inter for ​Real Madrid ahead of the 2010/11 campaign, and it was just a matter of months before he had annoyed people with his celebrations.

One of his most infamous incidents came in a 4-2 win over Villarreal in January 2011. When Kaká netted his side’s fourth, Mourinho turned to celebrate with the Real fans, who just so happened to be behind Villarreal’s bench.

He stood directly in front of the dugout and lifted his fist to celebrate, clearly trying to antagonise his opposite number. It worked, as someone from the Villarreal bench threw a bottle at Mourinho in anger.

Celebrating the Slip vs. Liverpool Chelsea’s 2-0​ win over ​Liverpool in April 2014 is more known for a little slip by Steven Gerrard (you probably haven’t heard about it). However, Mourinho managed to command a bit of the spotlight for himself.

After his second-string Chelsea side bagged a late second, Mourinho returned to his old ways and went running down the touchline, tapping the Blues badge on his jacket and screaming at the crowd.

He flung his arms up to the skies, clearly ecstatic that he had all but ended Liverpool’s push for the Premier League title. 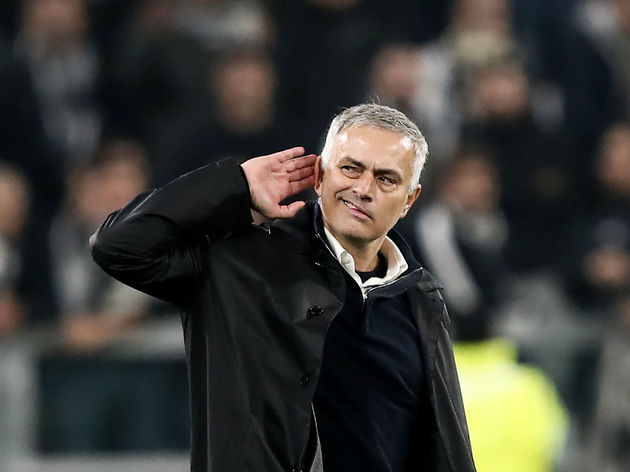 As a former Inter boss, Mourinho is hardly the most popular person among ​Juventus fans. When he visited the Allianz Stadium with ​United in November 2018, he was greeted by a chorus of boos for the entire game.

Two late goals from his side saw United steal a 2-1 win, and Mourinho chose to celebrate in style. He waltzed on to the pitch and cupped his hand to his ear, begging for the home fans to continue their abuse. He was loving every second of it.

The Red Devils needed that win to have any hope of qualifying for the next round, and Mourinho delivered. Just 20 days after the Juventus game, Mourinho was back at it again. This time, it was in a 1-0 win over Young Boys.

With 80 minutes gone, the score was still 0-0. All their hard work against Juventus looked to have been pointless as United were set to labour to a draw against the weakest side in the group, but a late Marouane Fellaini goal saved the day.

Clearly harbouring plenty of frustration, Mourinho celebrated by picking up his side’s water bottles and just slamming them all down on the floor, destroying pretty much everything around him. As you do. Mourinho’s brief time with ​Tottenham has been a real rollercoaster, and the recent 2-1 win over ​Wolves was no exception.

A late Jan Vertonghen goal managed to rescue all three points for Mourinho’s side, and it clearly meant a lot to the boss, who pulled out a little knee slide to let out his excitement.

He stayed in his technical area this time, proving that he has learned from his past mistakes. Progress.