​Whisper it quietly, but we may actually have a title race on our hands in Serie A this season.

Antonio Conte has instilled a winning mentality within his Inter team this year, and his players find themselves neck-and-neck with Juventus at the midpoint stage of the season. With I Bianconeri adapting to life after Massimiliano Allegri and learning the values of Maurizio Sarri, the Milan club may never be presented with a better opportunity to snatch the league trophy from their rivals’ clutches. But Juve are not the sort of side to lie down and simply hand over their throne, especially when there is the possibility of a staggering ten consecutive league titles.

Sarri’s men will undoubtedly come roaring back in 2020, and it is guaranteed to be one of the greatest title races that Italy has witnessed in years. With plenty at stake, there can only be one solution in January: spend, spend, spend.

But who should Antonio and Co be aiming to recruit this winter? 90min takes a look at six possible signings that can help Inter to dethrone the Old Lady.

One of the most exciting but frustrating talents in Italian football, Federico Chiesa has been on Inter’s radar for a number of transfer windows. Until now, I Nerazzurri have been unsuccessful in their attempts to buy the pacy and versatile forward. Chiesa can play anywhere across the front line, which would be an invaluable asset to Conte’s attack. Fiorentina have flattered to deceive over the last two seasons, and their young team is failing to live up to the expectations thrust upon them. Chiesa is the crown jewel in la Viola’s side, but he may finally have outgrown his restrictive surroundings.

Now this link has already been well-documented, but it is worth noting. ​Arturo Vidal is the ultimate midfielder who you’d want in your team – purely so you are not forced to face him at some point. The Chilean is also the perfect man to lead a Conte side into battle. The former Juve warrior is a steely character, and his influence both on and off the field must not be underestimated, particularly within a group of inexperienced players in the midst of an intense title race. Vidal’s time at ​Barcelona appears to be coming to a close, and with Inter setting themselves up for a possibly historic success, the 32-year-old could be a vital addition to the Nerazzurri squad.

Joao Cancelo broke Inter hearts back in 2018 when he chose not to extend his loan spell at San Siro – making the unforgivable switch to Turin instead, where he bagged a league title with ​Juve. Well, we say ‘unforgivable’, but a return to I Nerazzurri may bridge that ever-widening chasm. Cancelo won the hearts of the supporters in black and blue with his determined and dynamic displays during his year-long loan at Inter, and his career has gone from strength to strength from that moment. The Portuguese star has struggled to work his way into Pep Guardiola’s ​Manchester City side however, and his future at the Etihad Stadium is in doubt.

Conte has struggled to settle on an ideal candidate for his right wing-back role, and a move for Cancelo would definitely fix that. The big question is – are Inter supporters the ‘forgive and forget’ type? ​Mauro Icardi would tell you otherwise. Well. Wanda would, at least.

Conte has revitalised the career of ​Romelu Lukaku since his limp final season at Manchester United, and the Italian even got ​Alexis Sanchez firing – temporarily. But it appears that the common denominator for failure may actually be Old Trafford, and not the players themselves. With that in mind, who better to maximise the potential of left-back Luke Shaw, whose rapid rise to the top of football has come to an abrupt and career-threatening standstill. Inter are lacking genuine quality in the full-back areas, and given that Shaw has always shone when flying forward, he would suit Conte’s wing-back system wonderfully. With the former Southampton star rooted to the ​Man Utd bench, he must be questioning where his future lies.

Romelu Lukaku and Lautaro Martinez have struck up one of the most dangerous strike partnerships in Europe this season, bagging an absolute shedload of goals between them. But behind the duo, I Nerazzurri are severely limited. Youngster Sebastiano Esposito has come in when called upon, but the Italian is far too raw and rash to be relied upon in the big games. 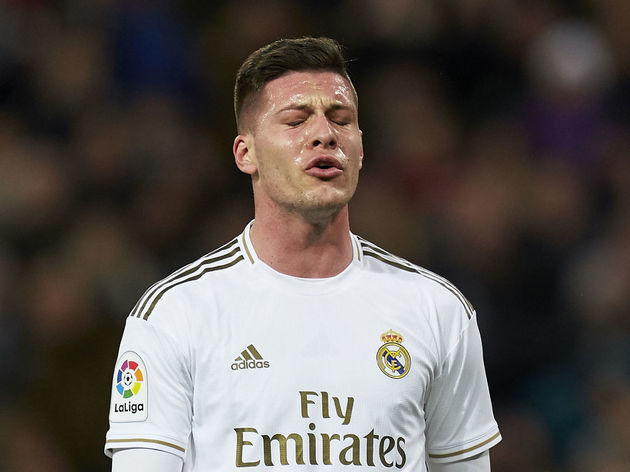 So what about an out-of-favour ​Real Madrid striker who blew away Europe last season with Eintracht Frankfurt? Luka Jovic was a world class goalscorer in Germany, but the Serb has fallen on hard times in Spain.

Conte is known for getting the best out of his players, and there is no doubting that he could be the man to unblock the stuttering striker.

As mentioned before, Inter are desperate for some extra bodies in midfield, especially given the injuries which regular starters Stefano Sensi and Nicolo Barella have suffered this season. I Nerazzurri’s title charge will come down to their ability to break down lesser teams in tight, cagey matches, and signing a lock-pick like ​Christian Eriksen could be the difference between glory and failure. The Danish international has only six months remaining on his current contract, and any European team will be free to sign the midfielder for nothing in the summer. But Conte is a man who lives in the here and now, and he will be thinking about the 2019/20 season – and no further. A cut-price deal could be agreed if ​Tottenham Hotspur are willing to cut the cord in January.

A bit of a fantasy signing – but who knows?