​For the first time in a while, it’s a genuinely exciting time to watch the Italian national team.

It wasn’t three years ago that they hit their lowest ebb in 60 years as they failed to qualify for the 2018 World Cup; they looked disjointed, they lacked direction, and it was increasingly unclear if they would ever get back to being competitive on the international stage.

That was until the galvanising arrival of Roberto Mancini. The former ​Manchester City and Inter boss swiftly picked his players up, dusted them down, and coached them to a remarkable qualifying campaign in which they took on all comers with aplomb. They won 10/10 to storm to the finals, the energy of youth taking centre stage where the former stale, tired formula had once reined supreme, and before us now stands a team realistically hopeful that their young guns can fire them to glory.

Here, we’ve had a look at the brightest talents available to the Azzurri, to give you some idea who to look out for this summer, and in the decade ahead.

Mancini’s trademark so far has been a fluid 4-3-3 system, relying heavily on creativity from midfield to supply Ciro Immobile and whichever of the rotating cast of wide forwards are selected at any given time. For the most part, Jorginho has sat at the base of that, with PSG playmaker Marco Verratti operating between the lines on one side of him. The other midfield role ought to have been up for grabs heading into the tournament, but the rapid-fire emergence of Nicolo Barella has ensured each of the midfield roles are well and truly nailed down.

The ​Inter man has gone from strength to strength under Antonio Conte in ​Serie A and his progression into one of the most promising and efficient midfielders around has been echoed on the international stage. He earned the praise of Andrea Pirlo while starring for Cagliari, and as he has matured he has shown an ability to judiciously balance his game, while remaining a real threat in the attacking third; as his five goal-involvements in qualifying will testify.

Perhaps only injury could part a midfield triumvirate yielding such success for Mancini so far; but it isn’t without its invaluable backup options. In the case of Jorginho, there is a prominent heir-apparent in Brescia’s teenage sensation Sandro Tonali. 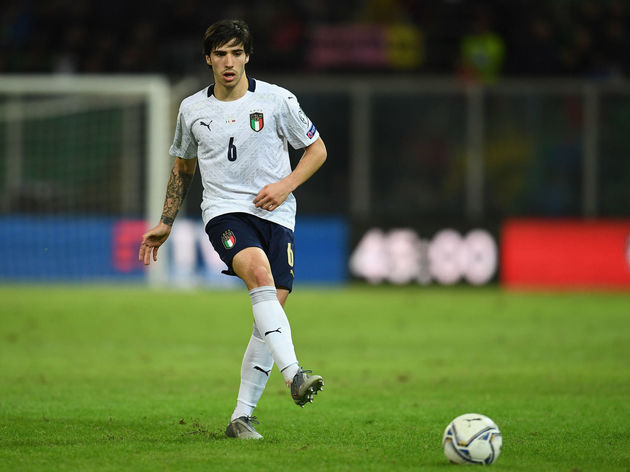 Perhaps not the strongest in the tackle nor the most physically imposing, the 19-year-old more than compensates with an intelligence and composure on the ball unrivalled by any of his immediate peers. Starring in Brescia’s promotion to Serie A, his decision to stay over the summer has proved fruitful, as he now stars on a weekly basis in the top flight, and looks set to be joining up with his country’s senior side once again this summer.

Fiorentina’s Gaetano Castrovilli is another who has benefited from time spent out of the limelight in Italy’s lower leagues. The 22-year-old arrived at La Viola from Serie C side Bari in 2017, subsequently joining Cremonese for a spell in the second tier which grew him into the playmaker that is now a fixture for his parent club.

On the international stage he lacks experience; only making his debut in a November cameo vs Bosnia-Herzegovina; but he is highly-rated among the Italy camp, and if his current form keeps up then it won’t be long before he can make a real case for himself as a starter.

The central midfield ranks are stacked, but further up the park there is no shortage of talent either. Roma starlet Nicolo Zaniolo will miss this summer’s Euros with a cruciate injury, but long-term he offers an option to Mancini unlike anything else he has available. It’s tricky to define him as a player; not quite a central midfielder, not quite a number ten, not quite a winger; more a combination of all three. Standing at 6ft 2, he offers an imposing, unconventional attacking threat, and although he tends to do his best work from the right flank, he can equally be deployed as an attacking alternative in midfield.

His versatility and abstruse positional ability means he has shifted about the Roma midfield a bit, but was nonetheless a fixture of the side before injury struck. Make no mistake, however; he’ll be back.

If he is to start as Italy’s right-winger going forward, however, he’ll have some competition; namely from Federico Chiesa, a name already very well-known to football fans in Italy and beyond. He has struggled to hit the heights he can this season, owing mainly to Fiorentina’s struggles, but has been trusted as a key part of Mancini’s plans; and that will be amplified with Zaniolo sitting out. He has competition from his namesake Federico Bernardeschi and Lorenzo Insigne for a starting berth, but the 22-year-old’s potential knows no bounds; nor does his explosive creative ability down the right hand side.

Of course, that’s just a select few of the highly-promising stars in the Italy ranks. There is no shortage of potentially generational talent emerging from the academies all over the country, and as excited as the Azzuri have the right to be ahead of Euro 2020, you get the feeling it is only the beginning.