​Ciro Immobile is yet to make his FIFA World Cup debut after Italy’s failure to qualify in 2018, but he’ll be taking part in his second European Championships campaign next summer.

The 29-year-old was still at Sevilla during the last tournament in France. Since then, he’s enjoyed a brief return to former side Torino, before completing a 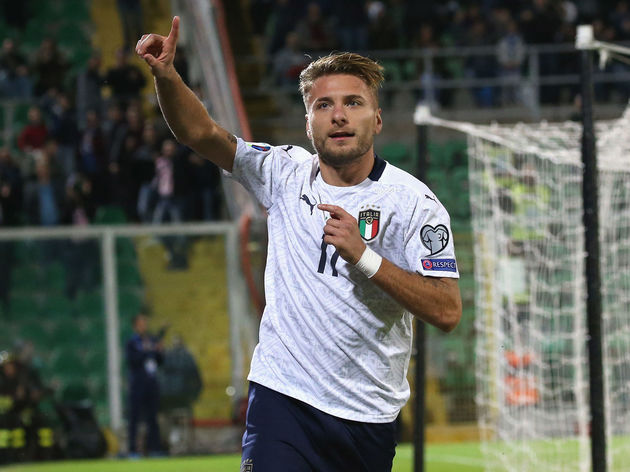 Anyone who’s familiar with ​Serie A will be all too aware of Immobile’s deadly talents up top. He’s already scored 26 goals in his 27 matches for Le Aquile this term, and there’s no sign of a let up anytime soon.

Switzerland, Wales and Turkey are the countries who’ll have to keep a watchful eye on this poacher, or else they could be hit with a sucker punch in the group stages of Euro 2020. That’s right, Immobile has been around the block a few times.

He’s represented seven different clubs from his home country, as well as two from outside, racking up the goals all the while.

The striker has made full use of his exquisite skill-set wherever he’s laid his hat, first gaining notoriety during his loan spells in Serie B. After impressing with Pescara, Immobile earned a permanent transfer to first-division Genoa.

 Ciro Immobile in Serie A this season for Lazio 

Though his first year in Serie A brought new challenges, Ciruzzo quickly adjusted, and returned to his

Dangerous with either foot, as well as in the air, Immobile continued his development with ​Borussia Dortmund and Sevilla, yet it was at Lazio when he truly came into his own.

112 goals in 161 appearances for the Olimpico side has turned him into a cult hero in the Italian capital. He’s always been clinical and had superb physical prowess, but it’s the forward’s intelligent off-ball runs and sharp decision-making that have taken him to the next level. He’s produced several remarkable seasons, though 2013/14 and 2017/18 stand out amongst the rest, with the frontman hitting a combined 64 goals in 81 games across those two campaigns.

Perhaps it should be no surprise that he won the Serie A Golden Boot both years, while also collecting the Europa League top scorer award in the latter.

It should be patently obvious why Immobile is one of the favourites to leave Euro 2020 as the competition’s leading goalscorer, especially in light of Italy’s dominance during the qualifying phase.

His blistering form in 2019/20 has ensured Lazio stay in the Serie A title race, with Le Aquile trailing leaders ​Juventus by just five points. This is a player who can carry a team towards glory, and that will be music to the ears of Gli Azzurri supporters. Ciruzzo reached that tally from only 13 attempts, leaving the hitman with a healthy conversion rate of 23%.

Immobile suits the brand of football Mancini wants to bring to the table, and he linked well with the likes of Jorginho, Nicolo Barella and Lorenzo Insigne in qualifying. This quartet could be leading the way for Italy come June.