​Football wildcards give our sport some of its very best stories, whether it be doing breathtaking things with the ball on the pitch, acting up and getting sent off, being the clown of the piece, or misbehaving away from the game.

Here’s a look at seven football wildcards who never did what they were told, on and off the pitch. Even now, Mario Balotelli can still be brilliant on the pitch when he puts his mind to it, with the Italian forward strong, aggressive, technically skilled and arguably one of the best penalty takers in the world. Yet he’s never had the maturity or fitness to make it last.

Having once been described by former Inter coach Jose Mourinho as ‘unmanageable’, it was at Manchester City that Balotelli’s bizarre off-field reputation ballooned.

Various stories about him emerged around that time, including driving into a women’s prison just to look around and throwing darts at youth team players. He also later gatecrashed a press conference when Inter unveiled a new manager in 2012, even though he didn’t play for them. George Best lived hard and fast in his football career as well as away from the pitch, becoming arguably England’s first ‘celebrity’ footballer in the 1960s and 1970s.

Possessing incredible natural talent, Best peaked early and won the Ballon d’Or at tender age of just 22 in 1968. He was both a prolific goalscorer, a fine creator of goals and an all-round magician that defenders often had to physically kick to try and keep him under wraps.

Away from football, Best was known for his party lifestyle and once quipped, “I spent a lot of money on booze, birds and fast cars. The rest I just squandered.” Sadly, his long struggle with alcoholism ultimately led to his premature death at the age of just 59 in 2005. 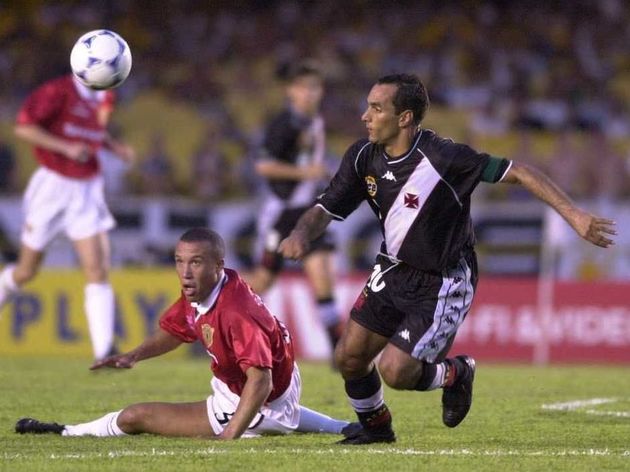 That Edmundo was nicknamed ‘The Animal’ tells you plenty about the former Brazil international, who was both tremendously gifted and extremely volatile – the latter included aggressive on-field behaviour, various disagreements and a reputation for partying.

Trickery, world class dribbling and vision made him hard to handle when it came to the football and he famously destroyed Manchester United in tandem with Romario for Vasco da Gama in the inaugural FIFA Club World Championship in 2000.

The enduring Edmundo story is that he once hired a circus to perform in his own back garden for his son’s birthday, with accusations that he even got a chimpanzee drunk. Ronaldinho could do virtually anything with a football at his feet and was twice named FIFA World Player of the Year at his Barcelona peak. A famous goal against Chelsea in the Champions League remains a testament to his unpredictability.

The Brazilian always looked to be enjoying himself on the pitch and took that enjoyment into his off-field life as well. That is perhaps what led to his departure from Barcelona in 2008, with Pep Guardiola hoping to build a new team around Lionel Messi, and his eventual decline.

The party lifestyle didn’t help his reputation at AC Milan, while many had questioned whether he and some of his Brazilian teammates had taken the 2006 World Cup seriously enough when they were considered heavy favourites to win. Eric Cantona was famously subject to different rules to everyone at Manchester United under Sir Alex Ferguson because he was so uniquely talented and a proven match winner.

In a stroke of masterful man management, Fergie simply thought it better to let the mercurial Frenchman do as he pleased rather than try to tame him – Cantona was able to get away with things like wearing trainers with the club suit, when others would have been pulled up.

Cantona, who had burned bridges in France by the time he arrived in England in 1991, scored iconic goals against Arsenal and Sunderland during his United career and was a catalyst for the club’s on-field success in the 1990s. But he was also tremendously volatile and was banned for eight months after kicking a fan, having already been sent off, in a game against Crystal Palace. Paul Gascoigne emerged as a maverick talent in the late 1980s and shot to fame at the 1990 World Cup. His brilliance could win games, as seen against Scotland at Euro ’96, but he also twice seriously injured himself in his career in dangerous tackles on opponents.

After moving to Lazio in 1992, Gascoigne was the subject of negative media coverage over his behaviour, although he proved to be a cult figure with his own fans. He later had to go on a diet when he reported for his second season in Italy overweight.

Gascoigne was first admitted to rehab for alcoholism in 1998 and by 2017 had entered a rehab centre for the eight time. He has also badly struggled with mental health over the years. Diego Maradona was brilliant enough to win the 1986 World Cup almost single-handedly for Argentina, dragging an otherwise unspectacular team to glory. He didn’t need instructions on how to play and the quarter-final against England showed both sides of the legend.

On the one, literal, hand (of God), he showed he would do anything to win. On the other, technical genius rose to the fore to produce one of the World Cup’s greatest ever goals.

Maradona is alleged to have started using cocaine as early as 1983 and continued until well after his playing career ended. But he never failed a drugs test until 1992 and later again in 1994, with the latter seeing him kicked out of that summer’s World Cup.

This article is brought to you by Birds of Prey, in cinemas soon. Check out the trailer below: