Lucimar Ferreira da Silva, or Lúcio, grew up in an unassuming district in central Brazil, joining the local team as a powerful 6’2 forward. Soon converted to a defender, he earned moves to Internacional, and then to Europe, where he scored in a Champions League final for Bayer Leverkusen. On the move again three years later, ​Bayern came calling, and the big Brazilian couldn’t refuse.

But Bayern don’t come calling for everyone. At Leverkusen, Lúcio had already forged a reputation as a rare, progressive, gem of a defender, gleaming in among plenty of more colourless defensive rocks. He stood out – something he did more and more as his career reached new heights in Bavaria.

By now, Lúcio had become known the world over for his marauding runs into the opposition box, and his dribbling technique that was almost too simple to work but which rarely failed him.

In England, he’s still remembered for the oh-so-rare mistake which cost his side a Michael Owen goal at the World Cup in 2002. He played every minute of Brazil’s tournament though, impressing at just 24 as his country lifted their most recent World Cup. 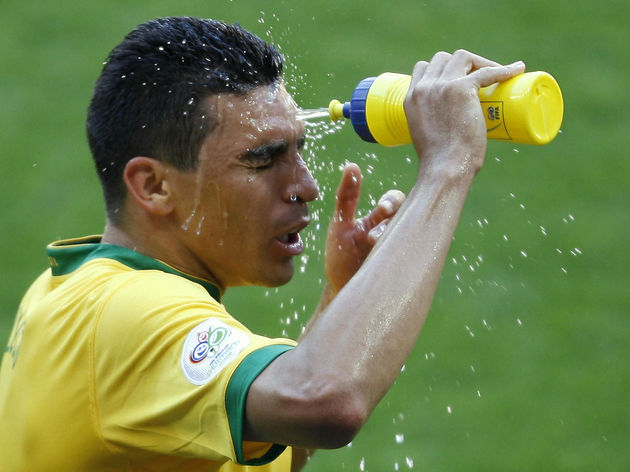 Four years later, Lúcio broke a FIFA record, clocking up an incredible 386 minutes without conceding a single foul at the 2006 World Cup, finally ending that run against France in the quarter-final. After the tournament, he became Brazil’s permanent captain, the role in which he is best remembered in his homeland.

Lúcio would go on to score the winning goal at the 2009 FIFA Confederations Cup and captain Brazil at the 2010 World Cup in South Africa. Here, although the quarterfinal was as far as Brazil could go, he managed to form a solid partnership with fellow centre-half, Juan.

He won the Champions League in a treble-winning season at his next club, where he was a member of that era-defining ​Inter side, masterminded and fathered by the exuberant José Mourinho.

Around this time, ​Lúcio was the best defender in the world.

Mourinho left Inter for a new challenge, and two years later so did Lúcio. He travelled west, but not very far, arriving in Turin to represent Italy’s new biggest club – Juventus.

This iteration of Juve were built of a rather more gritty, meritocratic and disciplined toughness. But Lúcio wouldn’t get to show the Old Lady much of his steel; Giorgio Chiellini, Leonardo Bonucci and Andrea Barzagli had already ingratiated themselves with the home faithful. At 33, the international career of Lúcio had already been finished a year, but his exploits in Europe were now over too. The homeland was calling – specif

A final voyage to foreign shores followed, with FC Goa of India signing a 37-year-old Lúcio as their marquee player. He spent two seasons playing for them, before returning to Brazil once more. But it wasn’t to retire – Lúcio hadn’t lost his appetite just yet.

Turning out for fourth division sides Gama and Brasiliense provided the defender a testing but never a difficult task. At this level, Lúcio sailed into his forties, retiring last month aged 41.

With Daniele De Rossi retiring earlier in January, for a few weeks at least, there was a spell when no outfield players from Italy’s 2006 World Cup-winning squad were still active at any level, but where one from the Brazil 2002 squad was. It was Lúcio.

February 2020 marks the first month since the mid-1990s in which Lúcio is not an active professional footballer. He was the most well-rounded defender of his generation, and one of the most influential centre-backs of all time.

They called him the last libero; football’s final reincarnation of Franz Beckenbauer – the man who revolutionised the sweeper position, but who was so much more than just a dogged defender.

Lúcio was more than adept in the tackle and in blocking; he could head home from free kicks, thunder in top corner free kicks off his right foot, dribble past players nonchalantly, dart into the box, and slam the ball into the net on a counterattack. He knew when to pass and when to clear, and he knew exactly who to pass to. It was multifaceted brilliance.

Brazil has spent the last 100 years overproducing in the fullback and forward areas. Their greatest ever centre-back has finally left the game. But this wasn’t a retweeted retirement – it most definitely went under the radar.

An evangelical Christian, Lúcio spent his life ascribing all good things to God. One can only hope the football world will come to respect and remember this warhorse in a similar light. It would be a travesty if it didn’t.