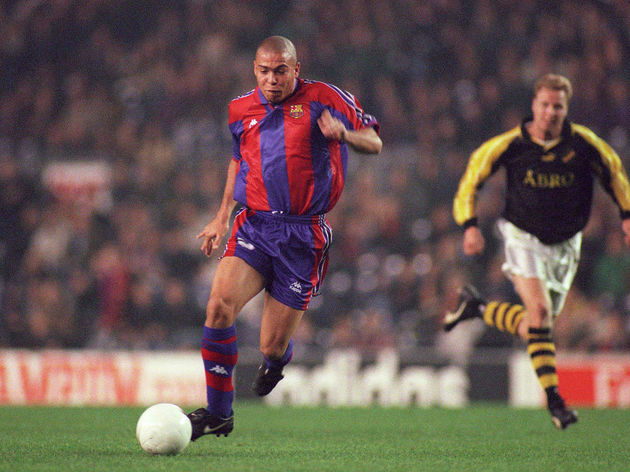 He grew up in a suburb of Rio de Janeiro, spending far more time kicking a ball around on the streets than sitting in a classroom. This streetball upbringing stayed with him throughout his career.

Even at the peak of his fame, Ronaldo always appeared unencumbered on the football pitch. He constantly had a smile on his face, seemingly un-arsed about all the commotion going on around him. As soon as he picked up the ball, he was transported back to that Rio suburb, playing with no fear and humiliating his opponents.

After cutting his teeth on the streets, Ronaldo made his first move into formal football with Cruzeiro at the age of 16. He was recommended to the club by ​Jairzinho – hero of the 1970 World Cup. As character references go… that’s a pretty good one.

His fantastical scoring exploits earned him a move to Europe with PSV Eindhoven in 1994. His tenure at the club was short, but it acts as a neat insight into his career as a whole. Aged just 18, Ronaldo hit 33 goals in his debut season. Earning praise from the likes of Romario and Rudi Voller, he seemed to have the world at his feet.

Cue season number two… and a spate of injuries. It was this duality that would come to define the forward’s career.

Despite these fitness problems, ​Barcelona still forked out a world record fee for his services in 1996. He would spend just one season at Camp Nou before disputes over his contract led to him signing for Inter – again for a record fee – but my word, what a season it was.

In the best physical state of his career, Ronaldo was an irresistible mix of grace and power. Gliding past defenders like they weren’t there and finishing with the composure of a kid still playing on the streets of Rio, he racked up a ridiculous 47 goals in all competitions. The guy was a complete freak.

Similarly impressive figures – if not quite as mind-boggling – were posted at ​Inter the following year, and going into the 1998 World Cup, Ronaldo was the best player on the planet.

It was at this tournament that he would become the subject of various conspiracy theories that persist to this day.

With Brazil due to meet hosts France in the final, Ronaldo – I’ll say it again, the best player on the planet – was conspicuously absent from the team, only for a new team sheet to be issued minutes later.

It would later emerge that he had suffered a medical episode during the day, and a miscommunication between Brazil’s management team had apparently lead to his name being withdrawn from the original XI. Had Nike forced him to play? Had he been possessed by a ghost? Who knows.

What we do know is that Ronaldo underperformed in a 3-0 win for France. Fortunately, he got his redemption four years later, scoring a brace in the final against Germany to win Brazil their fifth World Cup. Lovely.

On the club stage he continued to impress at Inter, scooping the Ballon d’Or in 1997 and a UEFA Cup in 1998.

But, then came the knee injuries. They would rob him of that blend of grace and power and the heights of that glorious season in Catalonia would never be reached again. A move to ​Real Madrid came in 2002 and as part of the Galacticos, he would pad his winners medal collection though the ​Champions League alluded him.

Towards the latter stage of his career, he broke the all-time World Cup scoring record in 2006 and also took in spells at Milan and Corinthians.

And that was that. A complex career over. A career that could have, no, should have been even better than it was.

Promise me this readers. If you ever find a magic lamp, give it a rub and wish for an alternative reality where Ronaldo was a picture of perfect health for his entire career.

What a sight to behold that would be.

90min’s ‘Top 50 Greatest Footballers of All Time’ can be found here.