A time machine (or Google) would reveal many memories from this date, including thrilling FA Cup semi-finals, stunning volleys, and the official end of a short-lived managerial tenure at Old Trafford.

Here’s some of the best action from this day in history.

In what ended up being a comfortable 3-0 victory over Portugal for the Three Lions, Alan Shearer netted a fantastic volley past Vítor Baía, smacking the ball right into the top corner.

His goal came in a game that was also notable for the Neville substitution – where Gary came off for Phil. A long-range half-volley from Luis García was enough for Liverpool to edge past rivals Chelsea in a close FA Cup semi-final.

The ​Reds led through John Arne Riise’s free-kick, before the Spaniard seized upon William Gallas’ poor header, and added a second. While Didier Drogba’s late header set up a tense finish to the game, the Merseyside club held on for the victory.

It was the second year in a row in which a Garcia goal would decide a semi-final against Chelsea…though this one definitely crossed the line. 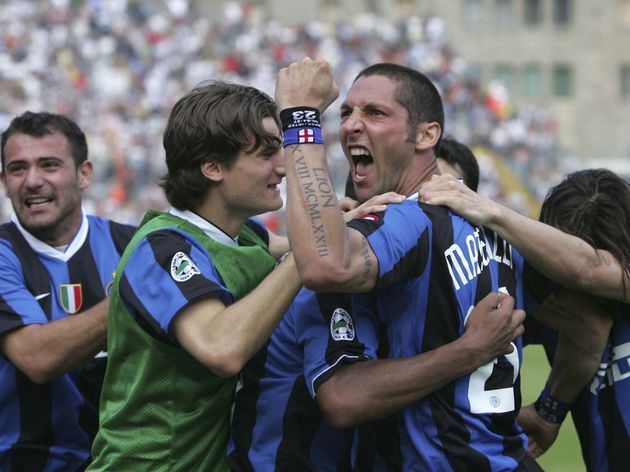 With no Juventus to compete with for the 2006/07 Serie A title, Inter were the heavy favourites to win the Scudetto.

And with Roma losing on the same day, a win over Siena would be enough to confirm their league triumph with five games to spare.

And the unlikely hero was defender Marco Materazzi, who opened the scoring, before Paolo Negro equalised three minutes later. Yet the ​Nerazzurri centre-back would slot home a penalty in the second half, which was the winning goal, and confirmed Roberto Mancini’s side would be crowned champions of Italy.

A cracker of a game that featured a world-class performance from Tony Hibbert.

Nikica Jelavić headed in from Hibbert’s cross to open the scoring for the ​Toffees, before Wayne Rooney equalised before half-time. After the break, goals from Danny Welbeck and Nani put the hosts into a 3-1 lead, with the game seemingly destined to end in a win for the Red Devils.

Yet Hibbert put in another cross that was volleyed in by Marouane Fellaini, and after Rooney made it four for Man Utd, Jelavić drove in his second to halve the deficit. And the comeback was complete when Steven Pienaar slid in past ​David de Gea to claim a point at Old Trafford.

2013 – Van Persie Scores A Hat-Trick – Including That Stunning Volley

Sir Alex Ferguson signed Robin van Persie with one thing in mind – to score a ton of goals that would win Man Utd their 20th ​Premier League title.

And the Dutchman delivered, scoring a hat-trick in just 31 minutes against a relegation-threatened ​Aston Villa team. It’s his second goal you’ll remember best – the former Arsenal striker showing unreal technique to crash in a fantastic left-foot volley from the edge of the box past Brad Guzan.

The 3-0 win sealed the Red Devils’ league title with four games still to go – and was the last time they have finished on top of the table since. The following season didn’t go well at all for ​United, with Ferguson’s hand-picked successor David Moyes being sacked exactly one year one from RVP’s volley, after just ten months in charge.

The Scot’s reign started well, winning the Community Shield in his first game. But it quickly went downhill, with poor results and rumoured discontent from the players at his management style. And a 2-0 defeat at former club Everton was the final straw, with the club sacking him shortly after.

All things considered, it was a pretty humbling experience for both club and manager. Javier Hernández didn’t have the most memorable season on loan at Real Madrid. But on this day five years ago, he was the hero for ​Los Blancos.

With the two Madrid teams heading for extra-time in their Champions League quarter-final, the Mexican tapped home Cristiano Ronaldo’s pass to spark wild celebrations at the Santiago Bernabéu, and send the hosts into the semi-final.

A game Spurs fans would love to forget, but this was still an entertaining game for the neutrals. And for ​Blues fans in particular.

Willian put the west London club in front, with a fine free-kick, before ​Harry Kane levelled for Mauricio Pochettino’s side. Yet the Brazilian would again score from a set-piece, when he coolly dispatched a penalty past Hugo Lloris, to give Antonio Conte’s side a 2-1 lead at the break.

And after Dele Alli equalised again for ​Spurs, the Italian made the inspired decision to bring on Eden Hazard. It worked wonders, with the Belgian’s powerful effort arrowing into the goal to restore the Blues’ advantage. And after some fine dribbling, the winger laid the ball off for Nemanja Matić to crash in a superb fourth goal, which sealed the west London club’s passage into the final. With both teams separated by only a handful of points, Napoli’s trip to the Allianz Stadium was always going to be crucial for the Serie A title race.

And having held the hosts to having no shots on target at all, they got their rewards when Kalidou Koulibaly headed in from a corner in the 90th minute to give ​Gli Azzurri a huge three points, as they moved to within a point of Juventus.

After a stellar season for Liverpool, it was Mo Salah who was awarded the PFA Player of the Year award just two years ago.

The ​Egyptian star finished with an astonishing 32 league goals during the season and was a key part of the Reds’ title challenge which ultimately fell short.