Barcelona were knocked out of the Champions League before kicking a ball on Wednesday as Inter Milan’s 4-0 win over Viktoria Plzen left them with only a Europa League place.

Ex-Premier League players Henrikh Mkhitaryan and Edin Dzeko scored first-half goals to set Inter on their way at the San Siro, before former Manchester City man Dzeko struck again in the second half.

Romelu Lukaku rounded off the victory late on, meaning Barcelona can only finish third in Group C.

It’s the second straight season Barcelona have exited the Champions League at the group stage, having gone 17 consecutive seasons making the knockouts.

There was still time for the Spanish side’s night to get even worse, though, when Bayern Munich cruised to a 3-0 win at the Nou Camp to secure first place in Group C.

Atletico Madrid made it a miserable night for Spanish sides by also crashing out of the Champions League thanks to a 2-2 draw at home to Bayer Leverkusen in which they missed a stoppage-time penalty.

Lukas Hradecky saved Yannick Carrasco’s spot kick before Saul Niguez’s follow-up hit the crossbar, meaning Diego Simeone’s side will exit at the group stage for just the second time in the last 10 years.

Leverkusen took the lead in the ninth minute through Moussa Diaby but Atletico levelled midway through the opening period thanks to Carrasco.

Xabi Alonso’s Leverkusen then took the lead again through Callum Hudson-Odoi, who scored his first goal for the club since joining on loan from Chelsea.

Atletico equalised early in the second half through Rodrigo De Paul but will now have to settle for scrapping with Leverkusen for a spot in the Europa League on matchday six.

Porto joined Club Brugge in the last 16 with a convincing 4-0 victory away to the Belgian side earlier on Wednesday. 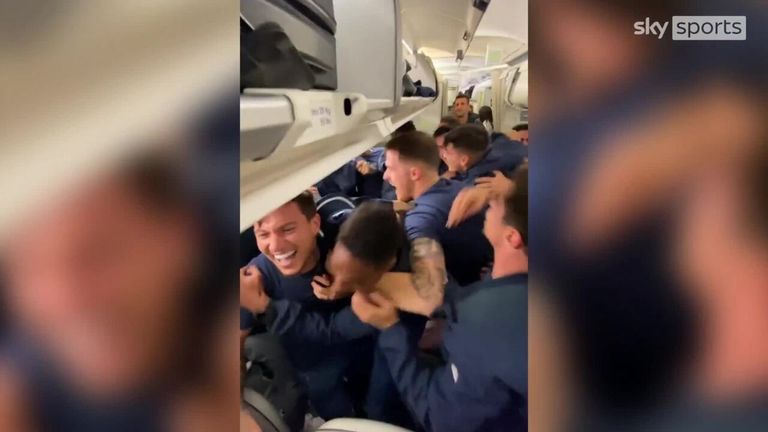 Mehdi Taremi put Porto into a first-half lead before goalkeeper Diogo Costa saved two penalties to deny the Belgian hosts a way back into the game early in the second half.

Evanilson, Stephen Eustaquio and Taremi then added three more goals in quick succession to give Porto revenge after they lost 4-0 at home to Club Brugge last month.

Frankfurt see off Marseille to leave Group D in flux

Frankfurt earned a 2-1 win at home to Marseille to leave Group D wide open and boost their chances of advancing on the final matchday next week.

The win lifted the reigning Europa League champions to seven points, one ahead of Marseille and level with second-placed Sporting Lisbon. Tottenham are top on eight after drawing 1-1 against the Portuguese side.

Daichi Kamada completed a superb passing move to put the hosts in front after three minutes with their first goal in a home game in the competition this season.

Marseille drew level with a Matteo Guendouzi close-range volley in the 22nd minute but their joy lasted only five minutes, as the former Arsenal midfielder turned from hero to villain by losing possession and allowing Mario Gotze to play a perfect one-two with Randal Kolo Muani, who slotted in the winner.

The winner of Frankfurt’s trip to Sporting next week will qualify for the round of 16, while a draw will also do for the Portuguese side.